What makes us human, I think, is an ability to ask questions, a consequence of our sophisticated spoken language. - Jane Goodall. Here are 37 Inspirational Jane Goodall Quotes on Life And Environment.

1. When I look back over my life it's almost as if there was a plan laid out for me - from the little girl who was so passionate about animals who longed to go to Africa and whose family couldn't afford to put her through college. Everyone laughed at my dreams. I was supposed to be a secretary in Bournemouth. -  Jane Goodall

2. I don't think that faith, whatever you're being faithful about, really can be scientifically explained. And I don't want to explain this whole life business through truth, science. There's so much mystery. There's so much awe. - Jane Goodall

3. I got my love of animals from the Dr. Doolittle books and my love of Africa from the Tarzan novels. I remember my mum taking me to the first Tarzan film, which starred Johnny Weissmuller, and bursting into tears. It wasn't what I had imagined at all. - Jane Goodall

4. Chimps are very quick to have a sudden fight or aggressive episode, but they're equally as good at reconciliation. - Jane Goodall

5. Certainly, the first true humans were unique by virtue of their large brains. It was because the human brain is so large when compared with that of a chimpanzee that paleontologists for years hunted for a half-ape, half-human skeleton that would provide a fossil link between the human and the ape. - Jane Goodall

6. It was both fascinating and appalling to learn that chimpanzees were capable of hostile and territorial behavior that was not unlike certain forms of primitive human warfare. - Jane Goodall

7. My family has very strong women. My mother never laughed at my dream of Africa, even though everyone else did because we didn't have any money, because Africa was the 'dark continent', and because I was a girl. -  Jane Goodall

9. In Tanzania, the chimps are isolated in a very tiny patch of forest. I flew over it 13 years ago and realized that, basically, all the trees had gone, that people all around the park are struggling to survive. It became very clear that there was no way to protect the chimps while the people were in this dire circumstance. - Jane Goodall

10. We can't leave people in abject poverty, so we need to raise the standard of living for 80% of the world's people, while bringing it down considerably for the 20% who are destroying our natural resources. - Jane Goodall

11. Certainly, if you look at human behavior around the world, you have to admit that we can be very aggressive. - Jane Goodall

13. I don't spend that much time being introspective, believe it or not. All I know is that I grew up not questioning God because that's how you are. God was there like the birds and the wind. - Jane Goodall

14. But does that mean that war and violence are inevitable? I would argue not because we have also evolved this amazingly sophisticated intellect, and we are capable of controlling our innate behavior a lot of the time. - Jane Goodall

15. War had always seemed to me to be a purely human behavior. Accounts of warlike behavior date back to the very first written records of human history; it seemed to be an almost universal characteristic of human groups. - Jane Goodall

16. People say maybe we have a soul and chimpanzees don't. I feel that it's quite possible that if we have souls, chimpanzees have souls as well. - Jane Goodall

17. I thought my life was mapped out. Research, living in the forest, teaching and writing. But in '86 I went to a conference and realized the chimpanzees were disappearing. I had worldwide recognition and a gift of communication. I had to use them. - Jane Goodall

18. I'm always pushing for human responsibility. Given that chimpanzees and many other animals are sentient and sapient, then we should treat them with respect. - Jane Goodall 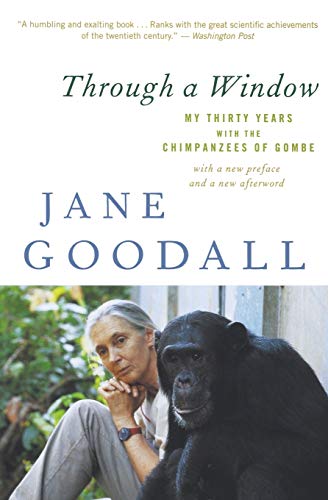 Through a Window: My Thirty Years with the Chimpanzees of Gombe Learn More Learn More
We earn a commission if you click this link and make a purchase at no additional cost to you.

19. It has actually been suggested that warfare may have been the principle evolutionary pressure that created the huge gap between the human brain and that of our closest living relatives, the anthropoid apes. Whole groups of hominids with inferior brains could not win wars and were therefore exterminated. - Jane Goodall

20. I did this book 'Harvest for Hope,' and I learned so much about food. And one thing I learned is that we have the guts not of a carnivore, but of an herbivore. Herbivore guts are very long because they have to get the last bit of nutrition out of leaves and things. - Jane Goodall

21. The part that always shocked me was the inter-community violence among the chimps: the patrols and the vicious attacks on strangers that lead to death. It's an unfortunate parallel to human behavior - they have a dark side just as we do. We have less excuse because we can deliberate, so I believe only we are capable of true calculated evil. - Jane Goodall

22. When I was two, a dragonfly flew near me. A man knocked it to the ground and trod on it. I remember crying because I'd caused the dragonfly to be killed. - Jane Goodall

23. As a small child in England, I had this dream of going to Africa. We didn't have any money and I was a girl, so everyone except my mother laughed at it. When I left school, there was no money for me to go to university, so I went to secretarial college and got a job. - Jane Goodall

24. Women tend to be more intuitive or to admit to being intuitive, and maybe the hard science approach isn't so attractive. The way that science is taught is very cold. I would never have become a scientist if I had been taught like that. - Jane Goodall

25. I think we're still in a muddle with our language because once you get words and a spoken language it gets harder to communicate. - Jane Goodall

26. My mother always taught us that if people don't agree with you, the important thing is to listen to them. But if you've listened to them carefully and you still think that you're right, then you must have the courage of your convictions. - Jane Goodall

27. It's been proven by quite a few studies that plants are good for our psychological development. If you green an area, the rate of crime goes down. Torture victims begin to recover when they spend time outside in a garden with flowers. So we need them, in some deep psychological sense, which I don't suppose anybody really understands yet. -  Jane Goodall

28. I think the most important thing is to keep active and to hope that your mind stays active. - Jane Goodall

29. You cannot share your life with a dog, as I had done in Bournemouth or a cat, and not know perfectly well that animals have personalities and minds and feelings. - Jane Goodall

30. I had been told from school onwards that the best definition of a human being was man the tool-maker - yet I had just watched a chimp tool-maker in action. I remember that day as vividly as if it was yesterday. - Jane Goodall

31. What makes us human, I think, is an ability to ask questions, a consequence of our sophisticated spoken language. - Jane Goodall

32. From my perspective, I absolutely believe in a greater spiritual power, far greater than I am, from which I have derived strength in moments of sadness or fear. That's what I believe, and it was very, very strong in the forest. - Jane Goodall

33. Change happens by listening and then starting a dialogue with the people who are doing something you don't believe is right. - Jane Goodall

34. The tree I had in the garden as a child, my beech tree, I used to climb up there and spend hours. I took my homework up there, my books, I went up there if I was sad, and it just felt very good to be up there among the green leaves and the birds and the sky. - Jane Goodall

35. When I was 10 years old, I loved - I loved books, and I used to haunt the secondhand bookshop. And I found a little book I could just afford, and I bought it, and I took it home. And I climbed up my favorite tree, and I read that book from cover to cover. And that was Tarzan of the Apes. I immediately fell in love with Tarzan. - Jane Goodall

36. My mother always used to say, 'Well, if you had been born a little girl growing up in Egypt, you would go to church or go to worship Allah, but surely if those people are worshipping a God, it must be the same God' - that's what she always said. The same God with different names. - Jane Goodall

37. Words can be said in bitterness and anger, and often there seems to be an element of truth in the nastiness. And words don't go away, they just echo around. - Jane Goodall 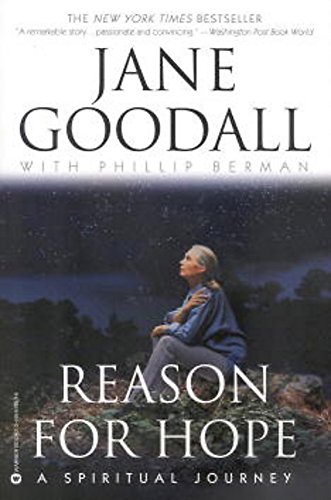 Reason for Hope: A Spiritual Journey Learn More Learn More
We earn a commission if you click this link and make a purchase at no additional cost to you.

- Worry About Yourself and Regain Control of Your Life

I've watched a lot of people who became famous who completely change and I think it's because they tend to believe all the hype that's out there. I don't think there's that much hype about me.  - Jane Goodall

I would never say I was an icon, but so many people have said I am, so I suppose I am. I mean, I can't not be what everyone says I am. But I don't feel like an icon.  - Jane Goodall

Whatever we believe about how we got to be the extraordinary creatures we are today is far less important than bringing our intellect to bear on how do we get together now around the world and get out of the mess that we've made. That's the key thing now. Never mind how we got to be who we are. - Jane Goodall