Steph Curry is a pro basketball player, all-star, champion and finals MVP with the Golden State Warriors. He is considered by many to be the greatest shooter in NBA history.

He changed the entire game of basketball by forcing teams to utilize the three point shot a lot more. He was on the Warriors team that broke the record for most wins in the regular season but ended up losing to the Lebron James Cavaliers in the finals.

He is the son of former NBA player Dell Curry and the brother of Seth Curry. He played college basketball for the Davidson Wildcats. He was a two time player of the year for the Southern Conference and still holds the all time scoring record. 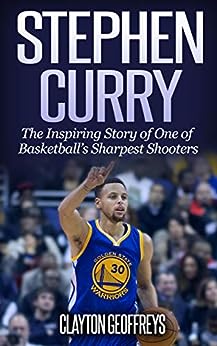 Stephen Curry: The Inspiring Story of One of Basketball's Sharpest Shooters (Basketball Biography Books)
$0.00
Learn More Learn More
We earn a commission if you click this link and make a purchase at no additional cost to you.

1. “I’ve never been afraid of big moments. I get butterflies… I get nervous and anxious, but I think those are all good signs that I’m ready for the moment.” – Stephen Curry

2. “I want to practice to the point where it’s almost uncomfortable how fast you shoot, so that in the game things kind of slow down.” – Stephen Curry

3. “Make sure you live in the moment and work your butt off every single day, and I hope I inspire people all around the world to just be themselves. Be humble, and be grateful for all the blessings in your life.” – Stephen Curry

4. “Being a superstar means you’ve reached your potential, and I don’t think I’ve reached my potential as a basketball player and as a leader yet.” – Stephen Curry

Steph Curry has not been in the news for scandals or losing his mind on teammates. The NBA loves Steph Curry because he has kept a very clean cut image.

He is a believer in Jesus Christ, he has a wonderful family and is a devoted husband. He has used his faith to stay grounded and his parents are also not scared to step in and drop some truth on him. You need people in your life to keep you grounded.

You also need to remember where you are from. Steph Curry was not a Lottery Draft pick and many people counted him out completely. He was considered to be too small and too weak on defense to make it and he remembers the doubters to stay grounded.

Stephen Curry altered the entire game of basketball. Centers used to play like Shaq and go straight to the post but now because of Steph its not uncommon for teams to want a center that can shoot the three ball. Steph Curry made people realize that its worth attempting more three balls vs going for two points. Now because of him, its not uncommon to see three point attempts from way behind the line.

You have to get in where you fit in but no one says that you can't change the rules. You have to change the way people think. If its not a rule, then it can more than likely be broken. If it is a rule then you can learn them well and then find ways to begin bending the rule.

Steph was underrated and he considered himself the underdog coming into the NBA and now he has one of the highest net worth's in the NBA. He worked for where he is today. His dad was an NBA player and he taught him about the work that it would take to be successful and he has made sure to put that work in.

Don't forget that you can have the best strategy in the world but at the end of the day you still need to work the plan! Without the work nothing comes alive. Work does not guarantee success but without the work you are for sure not going to win anything.

Golden: The Miraculous Rise of Steph Curry
$33.33
Learn More Learn More
We earn a commission if you click this link and make a purchase at no additional cost to you.