William O. Perkins III also known as Bill Perkins is a businessman, a recreational poker player, a proficient hedge fund manager and a film producer. He is head and founder of Small Ventures.

He started a job as a clerk but due to his skills, he started a business of his own. When he joined Centaurus in 2002, it was when his career began to take off.  In 2009, he produced his first film and received much recognition.

“A lot of the prop bets I do are motivating bets so if I have a friend that’s overweight I’ll prop bet him to better himself. “Not all of them, but a lot of them are designed for some benefit to come out of the prop bet," – Bill Perkins

“1 thing I like about being a trader is how many times you are wrong. Getting it wrong is a part of the job & you have to lose emotions if you want to be a successful trader especially the fear of being wrong. Think this training allows me to learn in other areas of my life better” – Bill Perkins

“My current understanding of MLK comes mostly from reading Parting The Waters: America in The king years. It's hard to put into words how vital and important MLKs life and others in this period laid a foundation for my success. I'm eternally grateful as should be the nation”. – Bill Perkins

“Harrowing experience growing up as a kid in Jersey City was when friends & I were out creating mischief being a kid one of the adults would stop us who I've never seen before in a totally diff neighbourhood & they go "hey, you're Billy Perkins kid arent you" – Bill Perkins

“People are increasingly willing to give up freedom and privacy in exchange for convenience at a rate that seems to be accelerating. Tech companies are the first to exploit this trend but the Govt. is not far behind”. – Bill Perkins 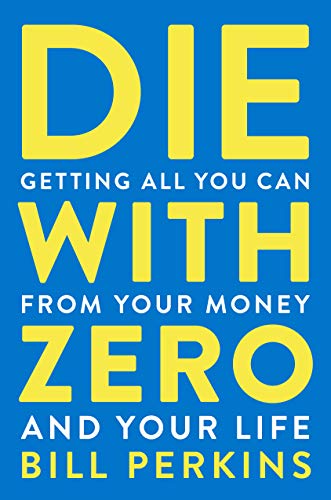 Die with Zero: Getting All You Can from Your Money and Your Life

Imagine if by the time you died, you did everything you were told to. You worked hard, saved your money, and looked forward to financial freedom when you retired.

The only thing you wasted along the way was…your life.

Success was not an overnight miracle for Bill, it was the result of constant hard work.  After School he jumped into the hedge fund sector. As an engineer he learned to utilize his abilities to make a profitable business.

Bill is very diverse in the things he is passionate about. One day he is gambling and the next he is working on an engineering problem. It all points to how much he loves to learn everyday.

Don't let school and formal education be the only time you learn. There is always time to learn and you need it because the competition is always looking for a way to get the edge over you. You can roll over and let them win, or you can focus on bettering yourself and learning new skills.

Bill Perkins is known as a very successful person, but he has remained humble through it all. Perkins has his hands in a number of different fields, proving that he is really intelligent. But all his success helps him to become more humble because he realizes how much he doesn't know. Being humble has helped him to attract the right people to his life because people love working with him.

As you begin your journey to success, don't let your big head get stuck in the door of opportunity. You need to remain humble because when you do it means that you know there is still more you can learn.

A cocky attitude is a sign of feeling over prepared or like you can never lose and that is far from the truth. Humble yourself or the world will do it for you.

Habit #3: Invest in Your Interest

Perkins has a degree in electrical and electronic engineering but he has never let that back him into a corner. He keeps on investing in his fields of interest. He has his equity and energy businesses and he also produces several films. He finds time for the things that he loves and works to grow those areas, even when they are not related.

Being successful means you get to spend your life working and caring for things that matter to you. Don't waste your life doing the things that other people think will be good for you. Do the things that you know will always bring you joy. Even if it means your not the best in the world at it.

Invest in Your Passions