Eddie Hall is one of the strongest men on the planet. He was a national record holder in swimming until one day he decided to try a strongman competition in his local fairgrounds. He was hooked ever since!

Eddie Hall is on the shorter side even at 6'2" tall in comparison to the rest of the professional strongman field. This height disadvantage has forced him to increase his body weight to match those he face.

"Yes, I'm doing damage to my body now. The human body isn't designed to be this size."- Eddie Hall

"Yes, I'm doing damage to my body now. The human body isn't designed to be this size."- Eddie Hall

"It's that great feeling, like the first man on the moon, the first man to run a mile in under four minutes. And now, I'm the first to deadlift half a ton. It's history, and I'm very proud to be a part of it."- Eddie Hall

"I remember watching World's Strongest Man as a kid, and I was just obsessed with it. At sort of five, six years old. Just watching these huge guys lift planes, pulls trains, lift stones - I was just mesmerized by it."-Eddie Hall 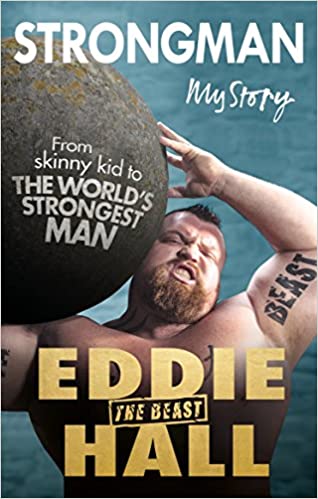 Strongman Learn More Learn More
We earn a commission if you click this link and make a purchase at no additional cost to you.

Eddie Hall had a deep obsession with becoming the strongest man on the planet. He took the most extreme of measures to become so. Eating far more than the normal person should eat, Lifting loads far above anyone else in the field.

He was literally killing himself to become the strongest man on the planet. He went all in to accomplish his dream and his deep love of the sport is what guided him through the hardships of becoming the Worlds Strongest Man.

Habit #2: Get In Their Heads

Eddie Hall was really good at getting in the head of his opponents. He could strategically get in the minds of those that were close to him on the field. In strongman there are different types of strength and Eddie Hall was by far the strongest athlete when it came to static strength (deadlift, squats, overhead press, etc)

When those events were planned he would beat everyone by so much that he would get in their head by say a few choice words as he easily lifted the 2nd place opponents number.

He would do this to try and gain an advantage during the moving events. He knew his strength and he knew his shortcomings so he would use psychological warfare to get an edge.

Now that you know what you want, and you are willing to go all in on it you have to apply real discipline to your goals. Eddie Hall allowed his love for the sport and the obsession he has for being the best to guide his day to day activities.

You have to know that everything you do daily are the foot steps that are marching you toward your end goals. The more disciplined you are the more likely you are to reach your end goal it is simply at that.

Get In Their Heads