Dennis Rodman built his net worth playing in the NBA. He played for the Bad Boy Pistons, The San Antonio Spurs, the Chicago Bulls and a few other teams. He is nicknamed the worm and is known for his incredible defense and rebounding. Rodman was a seven-time All-Defensive player and won the defensive player of the year award twice. He won five NBA championships and led the league in rebounds per game for seven years in a row. He is now in the Basketball Hall of Fame.

Rodman did not have a great childhood and it left him shy and introverted. After aborting a suicide in 1993 he decided to remake himself as a bad boy and the Dennis Rodman that we all know today. He began dying his hair, and getting a lot of piercings and tattoos.

The Jordan Rules Learn More Learn More
We earn a commission if you click this link and make a purchase at no additional cost to you.

"As long as I play ball, I can get any woman I want." - Dennis Rodman

"The only person I'm intimidated by is my ex-wife." - Dennis Rodman

"Fifty percent of life in the NBA is sex. The other fifty percent is money." - Dennis Rodman

"If I die young, everybody's going to say they saw it coming." - Dennis Rodman

"Don't let what other people think decide who you are." - Dennis Rodman

Habit #1 - Do The Little Things Well

Dennis Rodman is the perfect example of how scoring is not everything in basketball. He was a perfect fit on the 90's Bulls because he played hard and he was not trying to take shots or hog the ball. That was reserved for superstar Michael Jordan. Dennis Rodman was tasked with playing defense, and getting rebounds. He was the master of getting in the minds of his opponent. He became an unstoppable force when he stuck to what he did best.

You may not be the star of your team but that does not mean that your role does not matter. Everyone cannot be a superstar but people can realize that the superstar would not be as good without people willing to do the dirty work. Make a commitment to get really good at doing the little things well like Dennis Rodman.

Dennis Rodman was always willing to die on the court. No matter the rebound, the person challenging him or the jumping for a looseball, Dennis was willing to do and give his all for it. He had a lot of off court distractions but people would put up with them because he always gave his all. There is nothing you could knock him for when he stepped on the court because he tried with everything he had.

You can make up for a lack of talent with effort. Effort is not about talent its about caring enough to give your all and not everyone has the ability to do that. Focus on building the habit of giving maximum effort and people will like you more because at the very least, you care even if you don't have the talent.

Dennis Rodman decided that he wanted to be a "Bad Boy" and boy did he ever commit to it. He married Carmen Electra, tattooed his entire body, died his hair, got a lot of piercings. Dennis Rodman was a tall man so there was no doubt that he stood out a lot at this time in his life. There was no mistaking him or not being sure if it was really him. Everything he did off the court from his dresses to the drugs was done to make sure that he stood out. 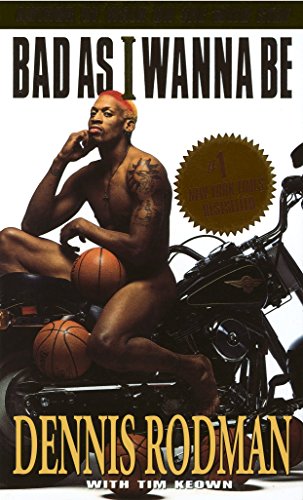 Bad as I Wanna Be Learn More Learn More
We earn a commission if you click this link and make a purchase at no additional cost to you.

Do The Little Things Well