Gisele Bundchen-Brady is better known as Gisele Bundchen was born on July 20th, 1980 in Southern Brazil. She is a Brazilian model and actress. Gisele was ranked as the 16th richest woman in the entertainment industry in 2007. Her net worth is estimated to be $400 million. She is in the list of the highest-paid models in the world and her net worth doesn't including the net worth of her husband Tom Brady.

Her modeling career began in 1996 in NYC. She modeled at New York Fashion Week as her first modeling job. She got her fame from walking for Alexander McQueen's Spring 1998 collection. Gisele was seen in many ad campaigns for popular brands like Ralph Lauren, Dolce & Gabbana, Valentino, Versace, Missoni, Gianfranco Ferre, and Chloe.

Rolling Stone named Gisele as “The Most Beautiful Girl in the World” in 2000.

Bundchen made headlines when she signed her $25 million contract with Victoria Secret in 2000. She ended her contract with them in 2007. Gisele has appeared on editorials and covers of many famous fashion magazines like Vogue, Vanity Fair, Marie Claire, GQ, Glamour, Elle, Sunday Time Style, Remix, Woman Arabia, Numero, and Vanidades.

“I think it's better when you're natural, when you just do whatever you want, instead of doing classes where I see all these other people holding back because they've been trained with certain skills or techniques. I'm like, whatever." –Gisele Bundchen

“I did kung fu up until two weeks before Benjamin was born, and yoga three days a week. I think a lot of people get pregnant and decide they can turn into garbage disposals. I was mindful about what I ate, and I gained only 30 pounds.” –Gisele Bundchen

“When I came to New York and I opened the window of the thirty-fifth-floor apartment, there's light pollution and fog, and I couldn't see my star. So I drew it on my wrist with a pen, but it kept washing away. Then I went to a tattoo parlor on Second Avenue and had it done.” –Gisele Bundchen

“I want to have a big family. My parents have been together for 36 years, and that is what I want. I am in that place. It’s all good in that part of my life. It’s one part of my life that I’m learning about every day. I’ve been challenged a lot by it, but it’s the most rewarding part.” – Gisele Bundchen

“When I walk down the runway, my main goal is to not think about the people watching. The idea of all eyes on me would make me too uncomfortable. As I step on the runway, I take a deep breath, focus on a point in the distance, and go!” – Gisele Bundchen

Habit #1: Work Hard and Be a Natural

Gisele works hard and as a result she has been awarded with fame and recognition. She has made it clear that she walks naturally when she is modelling. She feels that too many models feel the need to walk a certain way and it makes them look robotic.  She has established her work  and modelling career based on her own style instead of copying others. She follows her gut and just does what feels natural to her.

Bundchen came from Brazil and had to adapt to the American and New York way of living. She has been modeling for more than two decades and has had to adapt to all of the changes in the industry in order to continue being an in demand model.  Change is necessary for growth and acceptance is something that lets you live in reality. if you refuse to change and it means that you will never live in the realities of what is happening around you.

Gisele has to meet certain body standards to be acceptable for the brands she endorses. Even during pregnancy she would do yoga and martial arts to help her mind and body after the pregnancy was over. She and her husband choose to eat healthy to help them feel young, recover faster and to keep their bodies functioning properly.

You want to be as healthy as you possibly can. If you can make this a habit you will be doing your body a favor for the next few decades. When you eat poorly, it feels good now but in the long run you begin to damage your body. All the fried foods, sugar and lack of water start to add up and cause health problems. No amount of money can make you healthy from the inside out. 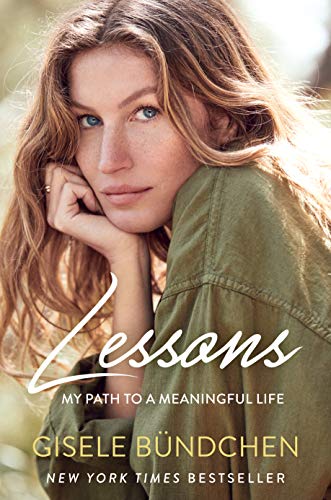 Lessons: My Path to a Meaningful Life
$12.99
Learn More Learn More
We earn a commission if you click this link and make a purchase at no additional cost to you.

Work Hard and Be Natural