Judge Judy built her net worth by pioneering the TV judge world. She has her won American Arbitration Court Show that she started as a retired judge. She had already done well for herself before the show but her $47 Million a year salary did not hurt her net worth.

All parties on the show must sign a contract agreeing to her ruling. The program has gone on to win three Emmy awards.  The show got its start in 1996 and has been on the air for over two decades.

Beauty Fades, Dumb Is Forever: The Making of a Happy Woman
$14.49
Learn More Learn More
We earn a commission if you click this link and make a purchase at no additional cost to you.

1. “I want first-time offenders to think of their first appearance in my courtroom as the second-worst experience of their lives. Circumcision being the first.” - Judge Judy

2. “I love the truth. If you don’t tell me the truth, you’re gonna be eating your shoes.” - Judge Judy

3. “I eat morons like you for breakfast. You’re gonna be crying before this is over.” - Judge Judy

Judge Judy has a one of a kind personality. She believes in hard work, being fair and just and she built her career on having an excellent reputation.

Her excellent character combined with her personality to be blunt and funny has made her irreplaceable. Think of Jeoperday without Alex Trebek or The Price is Right with no Bob Barker. The shows can go on but they are not the same.

Being irreplaceable is not about having a lot of money. Its about providing value and being willing to serve others being who you are.

When you serve others as yourself you can't be replaced because its impossible for someone to be just like you. It does not matter where life has you right now, keep asking yourself how you can provide more value.

Judge Judy took a serious thing like court and made it hilarious. Its normal to think of this now but when it first came out no one thought about laughing in court.

She is so blunt and she is not scared to embarrass people for their stupid ways. She is the reason that watching court can be funny for so many people today.

Humans will always spend their hard earned money to be entertained. Things like pro sports, wrestling, TV and streaming are not going anywhere because people feel they need entertainment in their life.

Find ways to bring humor to the things you do. Not in a way that is inappropriate though, it has to be done in a tasteful way and you can make anything serious more entertaining.

Habit #3 - Learn From Your Competitors

Judge Judy has never has  backed down from learning from competitors. She things it shows that you are intelligent when you can look at what people who have different views to you have to say.

Sam Walton built the entire Walmart empire by obsessing over what competitors were doing. Judge Judy has stayed ahead in life and business because she humbles her self and listens to what other people are doing well.

You have to humble yourself first because to learn form others it means admitting that you don't have all of the answers. Once you do that take, the time to look at what all of the competition around you is doing. 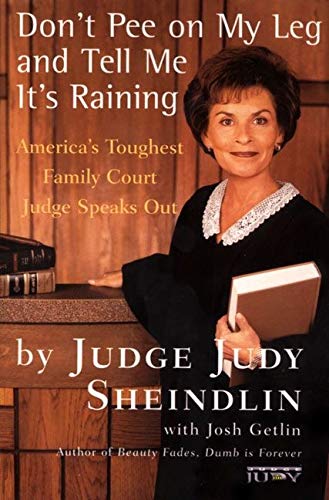 Don't Pee on My Leg and Tell Me It's Raining: America's Toughest Family Court Judge Speaks Out
$16.99
Learn More Learn More
We earn a commission if you click this link and make a purchase at no additional cost to you.

Have a Sense of Humor

Learn From Your Competitors