Kourtney Kardashian was born in April of 1979 in California. She is a model, reality TV star, businesswoman and socialite. She is a famous sister of  the show 'Keeping Up With The Kardashians'. Kourtney's net worth is estimated to be $45 million.

She is the oldest daughter of Kris Jenner and Robert Kardashian. Kourtney has two younger sisters Kim and Khloe and a brother Robert. Kourtney attended Marymount High School. She moved to Dallas after her graduation. There Kourtney studied at Southern Methodist University.

Kourtney started her career with the reality television show 'Filthy Rich Cattle Drive'. After that in 2007, she and her family appeared on the E!'s reality show' Keeping Up With The Kardashians'. This show turned out to be a huge success and it brought the whole Kardashian family to fame. Then came other spin-off shows including ‘Kourtney and Khloe Take Miami’ and ‘Kourtney and Kim Take New York’ in 2009 and 2011 respectively.

Kourtney also is an actress and she made her debut in 'One Life to Live' as attorney Kassandra Kavanagh. She was part of Kourtney and Khloe Take The Hamptons and a had few other smaller roles.

Along with her mother Kris, Kourtney opened a children's store 'smooch'. Soon after she launched a tanning place with her sisters. And also jewelry line for the company Saints, Virgins, and Angels.

“There’s no one else I would rather have as my manager than my mom because I know that she has our best interests at heart. Sometimes, it’s hard to separate manager mode from mom mode. I think as our manager, my mom will get more emotional about situations than she would if she was just our manager.” – Kourtney Kardashian

“I remember, when I went away to college at Southern Methodist University in Dallas, my aunt sent me a book with the rules of being a Southern Belle. One of the rules was to never wear white after Labor Day. Fashion has a lot to do with confidence and making up your own rules.” – Kourtney Kardashian

“Motherhood has most definitely changed me and my life. It’s so crazy how drastic even the small details change – in such an amazing way. Even silly things, like the fact that all of my pictures on my cell phone used to be of me at photo shoots – conceited, I know! – but now every single picture on my phone is of Mason.” – Kourtney Kardashian

“I would love to design a maternity clothing line. It is so hard to find stylish clothes for pregnant people... I would say 99 percent of the clothes I wore were not maternity because I couldn't find anything I liked.” – Kourtney Kardashian

“I love to read books that focus on parenting topics because there are so many different ways to do things. I find these books offer a lot of great opinions on many different subjects.” – Kourtney Kardashian

“I have so many pieces that once belonged to my mom and both of my grandmothers. All of these pieces are very sentimental, and I love to wear them. I also have many pieces from my father that I probably cherish the most. I love wearing his dress shirts.” – Kourtney Kardashian

The Kardashian’s reality show started off slower then many would guess. Everyone had something to say about the family and how the show was dumb. Kourtney is also disrespected a lot for not being as famous as her sisters and family. Even in the face of all of this hate, she keeps moving forward and still has built an impressive net worth for herself.

Forget what anyone has to say. You need to find your few trusted advisers that you let into your inner circle. Anyone who can't get into the circle needs to be disregarded. That does not mean you need to be disrespectful but you need to recognize that not everyone's opinion gets a seat at the table.

Kourtney is one of the least talked about members of the Kardashian family but she has made smart moves just like the rest of her family. She was smart enough to adapt to changes happening with the internet and the move to social media. She gets the best of both worlds though because she has the money, the followers but she does not have to deal with as much of the fame and craziness as her sister.

Always skate to where the puck is going not where it is. If you keep skating to where it is, you will get to the spot and it will be gone. A lot of people feel this way when they don't adapt to life changes quick enough. They work on something only to realize they were way behind and everyone has moved on to something else.

The real dream of being a Kardashian is that they all win together. No one gets left behind to starve in that family. They have made sure to build a fabulous life for everyone from top to bottom. Most families dream of this but they could not work together to plan a wedding together, nevermind managing a billion dollar empire.

You should not want to be wealthy so you can be alone at the top. There is no fun in that. You want to build wealth in a way so that everyone you love gets to succeed and eat good. The Kardashians are one of the best examples of sticking together and winning together. 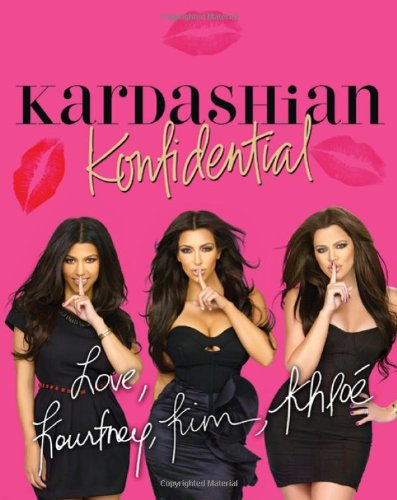 Kardashian Konfidential
$9.98
Learn More Learn More
We earn a commission if you click this link and make a purchase at no additional cost to you.