Zendaya Net Worth and Key Habits

Zendaya has built her net worth as an actress and singer. She got her start as a child-model and did some dancing before she got her role as Rocky Blue on the show Shake It Up. She has played some major roles on TV shows and been a supporting actress in Euphoria, and Spiderman.

She got her start in music by recording her songs independently. Her success on her own eventually got her signed with Hollywood Records. She released the song Replay which was a top 50 hit on the billboards. She has continued to release songs showcasing her awesome talents.

"If there's any definition to being perfect, you're perfect at being yourself," she said. "There is no such thing as ugly." - Zendaya

"No matter what you're dealing with, it's so much harder and more draining and so much more exhausting to be constantly pretending to be something that you're not." - Zendaya

“I can definitely say I use [social media] on a daily basis, but I definitely think it’s important to enjoy it but also enjoy real life too," she said. "Be able to know when you can take a break or should take a break and be comfortable with yourself when your phone isn’t involved in the equation. So it’s all about a balance.” - Zendaya

Habit #1 - Confidence is Everything

Zendaya is known for saying you can rock a trash bag if you have confidence. You never see Zendaya looking down or like she doesn't believe she has what it takes to be great.

She is a beautiful woman but her confidence is what takes her to superstar levels. You just want to stair at her because she is radiating with the type of self belief that we all need.

If you don't believe in you then no one else is going to. You have to find ways to count yourself as one of the best to ever do it. The greats always say and know it before it ever happens.

When you are confident in yourself you are more likely to succeed because you can get through the set backs. Where as a person who has no belief crumbles at the foot of every obstacle.

Habit #2 - Stick to Your Vision

Zendaya has come out swinging with her career. She is young and giving other young girls hope that they can be successful as well.

The most impressive part about Zendaya and her career is the fact that she has been able to have success as a dancer, singer and an actress. She has a big vision for her life and she is going after it all.

You know what you want for your life. Don't let anything bend or break that vision. There will be haters, distractions and set backs that will make you question your vision.

You don't want to look back on your life and realize that you followed someone else's vision for your life because it was easier.

Zendaya has built a wonderful net worth and seen a lot of success because she is willing to push herself outside of her comfort zone. She is not just taking roles that will be easy for her. She is seeking roles that have her playing different characters while also maintaining her career as a musician.

If you want to see how far you can go, you're going to have to push yourself. There is no way to get around this! If you're comfortable it means you're not growing and stretching your horizons. 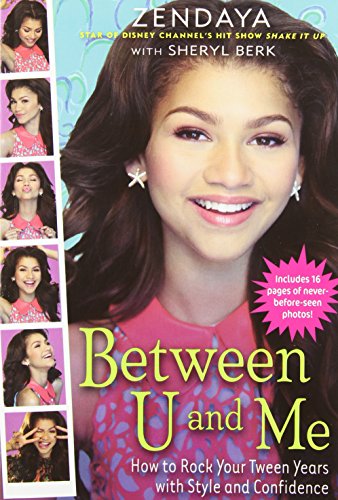 Between U and Me: How to Rock Your Tween Years with Style and Confidence Learn More Learn More
We earn a commission if you click this link and make a purchase at no additional cost to you.

Stick to Your Vision