Andrew Yang is an American lawyer who is also as an entrepreneur, author, philanthropist, and politician. He became popular in 2017 when he declared to run for Democratic presidential candidate and for believing in universal income.

Yang qualified for the Johns Hopkins University's Center for Talented Youth when he was just 12 years. This was after scoring 1220 out of 1600 on the SAT.

Yang started his career as a corporate lawyer in New York City after completing his law studies. However, he found his new career unfulfilling and quit in the first five months.

Yang started a few companies and he was the vice president of a health care startup between 2002 and 2005. He became the CEO of Manhattan Prep in 2006 before it was acquired by Kaplan in 2009.

Andrew resigned from Manhattan Prep for Venture for America (VFA) in 2011.  VFA aimed at training and mentoring graduates to start businesses instead of seeking employment in big firms. Yang resigned as the CEO of VFA in 2017 to focus on his campaigns to become the president of the USA. Yang has also authored several books.

Smart People Should Build Things: How to Restore Our Culture of Achievement, Build a Path for Entrepreneurs, and Create New Jobs in America Learn More Learn More
We earn a commission if you click this link and make a purchase at no additional cost to you.

“Mistakes are acceptable if they're the result of moving forward.” - Andrew Yang

“Tell young girls they can be anything, including entrepreneurs and self-made billionaires. Encourage your friends/daughters/female students/yourself to take a shot.” - Andrew Yang

“Every entrepreneur doesn't need to be technical - there are plenty of opportunities out there for people who aren't coders.” - Andrew Yang

“As a society, we can't hide from the future; we have to build and own it.” - Andrew Yang

“People can grow from adversity as much as they do from prosperity.” - Andrew Yang

“FOMO (fear of missing out) is the enemy of valuing your own time.” - Andrew Yang

Habit #1: Keep Trying and Believe in Yourself

According to Yang, the secret to success is to keep trying and believing in oneself. Yang has tried his luck in many startups and career paths. Although he has made several mistakes and failures along the way, Yang never gave up.

He kept trying because he believed that he would eventually win. He knew that one day he would make a substantial change in his life and make an impact on the world.

You cannot go far in life if you do not believe in yourself or if you give up quickly after making a mistake. The journey to success is a tough one and you have to be a fighter to make it.

Yang focuses on his future because he knows that he cannot change anything in his past. His main goal is to make the future better than his present. Yang only participates in things that can change his present and future finances.

Do not focus on short-term happiness and fulfillment. On the contrary, focus on things that can give you a better future. It is better to struggle now and be happy in the future than have a short-lived satisfaction and then live the rest of your life in regret.

The journey to success sometimes requires working with others. You need to collaborate with like-minded people to make huge achievements. Yang prefers working with people that are like minded. He never hesitates to quit if he realizes that the people he is working with have different core beliefs.

The easiest route to success is by teaming up with people that share goals and objectives with you. You should avoid working with people whose views differ from yours because teamwork can never work. You can talk with them and learn from them, but being on the same team will often fail. 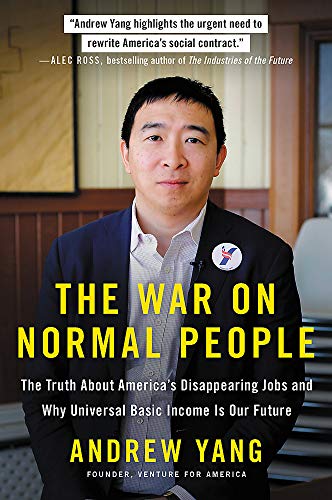 The War on Normal People: The Truth About America's Disappearing Jobs and Why Universal Basic Income Is Our Future Learn More Learn More
We earn a commission if you click this link and make a purchase at no additional cost to you.

Keep Trying and Believe in Yourself