1. “Everybody’s got plans… until they get hit.” – Mike Tyson

2. “Life is gonna throw you curve balls and it’s how you deal with them and your attitude and your work ethic.” – Kerri Strug

3. “Believe me, the reward is not so great without the struggle.” – Wilma Rudolph

5. “I would have thought that the knowledge that you are going to be leapt upon by half-a-dozen congratulatory, but sweaty team-mates would be inducement not to score a goal.” – Arthur Marshall

7. “Pressure is a word that is misused in our vocabulary. When you start thinking of pressure, it’s because you’ve started to think of failure.” – Tommy Lasorda

9. “I’ve always made a total effort, even when the odds seemed entirely against me. I never quit trying; I never felt that I didn’t have a chance to win.” – Arnold Palmer

10. “You’re never a loser until you quit trying.”– Mike Ditka

11. “What makes something special is not just what you have to gain, but what you feel there is to lose.” – Andre Agassi

12. “Never let your head hang down. Never give up and sit down and grieve. Find another way.”– Satchel Paige

14. “The will to win is important, but the will to prepare is vital.”– Joe Paterno

16. “Push yourself again and again. Don’t give an inch until the final buzzer sounds.”– Larry Bird

17. “In sports, players need to be reminded of their competition to become motivated to practice. The same can be applied in business.” – Gavin McGinnis

18. “Just keep going. Everybody gets better if they keep at it.”– Ted Williams

22. “Obstacles don’t have to stop you. If you run into a wall, don’t turn around and give up. Figure out how to climb it, go through it, or work around it.”– Michael Jordan

24. “If you don’t have confidence, you’ll always find a way not to win.”– Carl Lewis

25. “Bodybuilding is much like any other sport. To be successful, you must dedicate yourself 100% to your training, diet and mental approach.” – Arnold Schwarzenegger

27. “I’ve had to learn to fight all my life – got to learn to keep smiling. If you smile things will work out.” – Serena Williams

28. “Winning is the most important thing in my life, after breathing. Breathing first, winning next.”— George Steinbrenner

29. “Goals prepare Olympic athletes physically and mentally. Did you know that goals are used by sports psychologists in order to help athletes improve their performance?” – Paul Bailey

30. “To me the beauty of teamwork is the beauty of our sport, where you have five acting as one. You become selfless.” – Coach Mike Krzyzewski

33. “It isn’t the mountains ahead to climb that wear you out; it’s the pebble in your shoe.” – Muhammad Ali

34. “Some may have more talent than you, but there is no excuse for anyone working harder than you do.” – John Tavares

35. “Kill them with success and bury them with a smile.” – Usain Bolt

37. “You are the handicap you must face. You are the one who must choose your place.” – James Lane Allen

38. “The most rewarding things you do in life are often the ones that look like they cannot be done.” – Arnold Palmer

39. “You’ve got to be very careful if you don’t know where you are going, because you might not get there.” – Yogi Berra

42. “You’ll score a lot of goals in your career but not one of them will happen without the help of a teammate.” – Abby Wambach

43. “I am no genius; I just worked hard like my other teammates, and I believe all my teammates can win the title as they work hard, too.” – Lin Dan

45. “In baseball and in business, there are three types of people. Those who make it happen, those who watch it happen, and those who wonder what happened.” – Tommy Lasorda

46. “So many people along the way, whatever it is you aspire to do, will tell you it can’t be done. But all it takes is imagination. You dream. You plan. You reach.” – Michael Phelps

47. “I am a member of a team, and I rely on the team, I defer to it and sacrifice for it, because the team, not the individual, is the ultimate champion.” – Mia Hamm

48. “For me, winning isn’t something that happens suddenly on the field when the whistle blows and the crowds roar. Winning is something that builds physically and mentally every day that you train and every night that you dream.” — Emmitt Smith 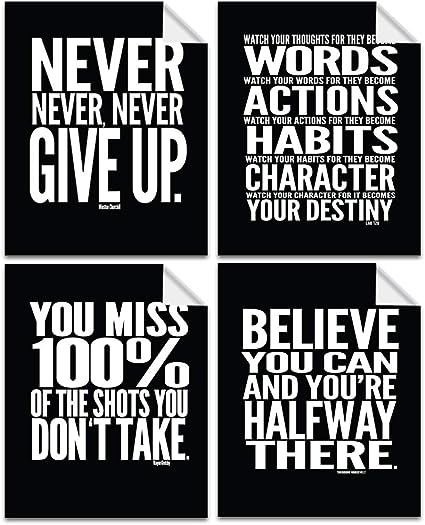 Lushleaf Designs - Motivational Quote Workout Gym Posters - 8" x 10" Inches - Classroom and Office Wall Art - Black Matte Finish - Adhesive Backing Can Stick On Smooth Surfaces - Set of 4
$7.99
Learn More Learn More
We earn a commission if you click this link and make a purchase at no additional cost to you.

“If you can believe it, the mind can achieve it.”– Ronnie Lott

“To uncover your true potential you must first find your own limits and then you have to have the courage to blow past them.”– Picabo Street