“He has put a knife on the things that held us together and we have fallen apart.” - Chinua Achebe. Here 35 Inspirational Chinua Achebe Quotes.

1. My weapon is literature - Chinua Achebe

2. Villages that their leaders came together to save themselves.- Chinua Achebe

3. Fortunately, among these people, a man was judged according to his worth and not according to the worth of his father.- Chinua Achebe

4. Proverbs are the palm oil with which words are eaten.- Chinua Achebe

5. I am Fire-that-burns-without-faggots.- Chinua Achebe

6. To show affection was a sign of weakness; the only thing worth demonstrating was strength.- Chinua Achebe

7. The fly that no one to advise it follows the corpse into the grave.- Chinua Achebe

8. The air, which had been stretched taut with excitement, relaxed again.- Chinua Achebe

9. He has put a knife on the things that held us together and we have fallen apart. - Chinua Achebe

11. And theories are no more than fictions which help us to make sense of experience and which are subject to disconfirmation when their explanations are no longer adequate.- Chinua Achebe

12. When a man is at peace with his gods and ancestors, his harvest will be good or bad according to the strength of his arm.- Chinua Achebe

13. As our fathers said, you can tell a ripe corn by its look.- Chinua Achebe

14. It is the story that owns and directs us. It is the thing that makes us different from cattle; it is the mark on the face that sets one people apart from their neighbors.- Chinua Achebe

15. When mother-cow is chewing grass its young ones watch its mouth.- Chinua Achebe

16. When a coward sees a man he can beat he becomes hungry for a fight.- Chinua Achebe

Things Fall Apart
$11.49
Learn More Learn More
We earn a commission if you click this link and make a purchase at no additional cost to you.

17. There was a saying in Umuofia that as a man danced so the drums were beaten for him.- Chinua Achebe

18. That we are surrounded by deep mysteries is known to all but the incurably ignorant.- Chinua Achebe

20. Those whose kernels were cracked by benevolent spirit should not forget to be humble.- Chinua Achebe

21. An old woman is always uneasy when dry bones are mentioned in a proverb.- Chinua Achebe

22. A toad does not run in the daytime for nothing.- Chinua Achebe

24. Women and music should not be dated.- Chinua Achebe

25. People from different parts of the world can respond to the same story if it says something to them about their own history and their own experience.- Chinua Achebe

26. Every generation must recognize and embrace the task it is peculiarly designed by history and by providence to perform.- Chinua Achebe

27. The impatient idealist says: 'Give me a place to stand and I shall move the earth.' But such a place does not exist. We all have to stand on the earth itself and go with her at her pace.- Chinua Achebe

28. There is a moral obligation, I think, not to ally oneself with power against the powerless.- Chinua Achebe

29. A man who pays respect to the great paves the way for his own greatness.- Chinua Achebe

30. The world has no end, and what is good among one people is an abomination with others.- Chinua Achebe

31. A child cannot pay for its mother’s milk.- Chinua Achebe

32. When Suffering knocks at your door and you say there is no seat left for him, he tells you not to worry because he has brought his own stool.- Chinua Achebe

33. It is the storyteller who makes us what we are, who creates history. The storyteller creates the memory that the survivors must have - otherwise their surviving would have no meaning.- Chinua Achebe

34. It always surprised him when he thought of it later that he did not sink under the load of despair.- Chinua Achebe

35. Privilege, you see, is one of the great adversaries of the imagination; it spreads a thick layer of adipose tissue over our sensitivity.- Chinua Achebe 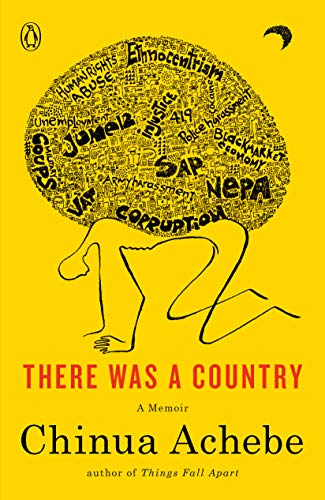 There Was a Country: A Memoir
$14.99
Learn More Learn More
We earn a commission if you click this link and make a purchase at no additional cost to you.

- 40 Inspirational Quotes to Bring You Life

Nobody can teach me who I am.- Chinua Achebe

If you don't like my story,write your own.- Chinua Achebe