Gordon David Sondland is an American political figure and a self-made businessman. Sondland is co-founder of Aspen Capital and chairman and founder of Provenance Hotels. He is also an United States Ambassador to the EU. He was a major donor for Trump’s election campaign. Sondland was a witness in November 2019, to testify to help impeach President Donald Trump.

Sondland and his family saw numerous hardships and actually survived Nazis persecution. His father also fought Nazis and the British army. Gordon Graduated in Bachelors of Arts from Washington University.

His company manages hotels throughout America. His earnings mainly come from his hotel business. Gordon’s net worth is estimated to be $60 million and he enjoys living a luxurious lifestyle with things like his own private jet.

"Well, I love Europe and I love Europeans; when I look at my own personal travel, for most of my life, 80 percent of it has been to European countries. And that was long before I ever considered becoming an ambassador or was offered the opportunity because I love everything about Europe. I like the culture. I like the food. I like the charm." - Gordon Sondland

"My mother was able to get out of Germany because her father was Russian and those with a Russian passport could leave. My father was not so fortunate. He had to be smuggled out of Germany by being tied to the bow of a vegetable freighter that was leaving in the North Sea. He almost lost a leg because it was so cold, but he ended up in France." - Gordon Sondland

"You don't want to sell a business to someone that you think is a Dane, or an American, or a Greek, then find out it's Chinese money or control behind it."  - Gordon Sondland

"We all share an interest in seeing China offer greater market access and eliminate unfair trade practices, and together we can insist China take the necessary steps to allow its economy to operate more fairly." - Gordon Sondland

"Secretary Perry, Ambassador Volker and I worked with Mr. Rudy Giuliani on Ukraine matters at the express direction of the President of the United States. We did not want to work with Mr. Giuliani. Simply put, we played the hand we were dealt."  - Gordon Sondland

?Husbands and wives have spats about money. It doesn't mean they're going to get a divorce."  - Gordon Sondland

"I believe the JCPOA is deficient in 12 issues that the parties that signed it did not include in it. And until those 12 issues are dealt with, I don't believe that it's in the United States' interests to be held to it." - Gordon Sondland

Gordon Sondland is a very strategic person. Everything he does is calculated and for his own benefit. He donated to the Trump campaign and then later was named an Ambassador and that was of no coincidence. He give money to charities and other causes but they all for underlying agendas and tax reasons. He has built a massive business empire because he things very strategically about every move he takes.

Some people see this as a bad thing, but there is nothing wrong with being strategic. The biggest thing you can learn from Gordon is to think hard before you take action. Think about your goals and desires and where you want to end up. If you improve your decision making, you improve your entire life.

Sondland is good at building excellent relationships. His journey from businessman to ambassador was because he is excellent at building his network. He knows how to provide value so that people in power owe him one. He funded president Trump's election campaigns and spent $1 million on the inauguration ceremony. He did everything he could to strategically put himself in a great spot.

Be great at building different types of relationships. You will have romantic bonds, friendships, acquaintances, business relationships and many more. You have to be effective and building them all to live a good life and be successful. Devote time everyday to strengthening a few different relationships.

Gordon has been very irresponsible with some of his business practices. He has not done the best job to keep confidential things private and frankly he wreaks of privilege most of the time.

Clearly this is a negative habit he posses but you can also learn something good from it. When you are granted access to power, you need to be responsible with it. With great power comes great responsibility and there is always a way to revoke what you have been given. 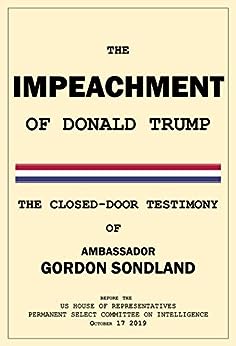 The Impeachment of Donald Trump: The Closed-Door Sondland Testimony
$0.00
Learn More Learn More
We earn a commission if you click this link and make a purchase at no additional cost to you.