Sara Blakely is a fun entrepreneur with a beautiful smile and a contagious attitude. You can't help but like her and want to root for her to do well. She is the founder of Spanx, and the story she has to go with building the Billion Dollar company is fantastic. She was a salesman going door to door trying to push products, and she stopped on the day and said: "this can't be my life!" These are words that so many people can relate to. The difference between her and everyone else is that she took action. She was not content, just living an average life. She wanted to see what her full potential looked like.

Sara had the idea for Spanx because she wanted to be able to wear some white pants without people being able to see what she had on under her pants. She figured that if she had this problem, millions of other women might have had the same problem. She was 100% right about this. Sarah Blakely is relatively young to be a billionaire, and that makes her that much more inspiring.

"You've got to visualize where you're headed and be very clear about it. Take a Polaroid picture of where you're going to be in a few years." – Sara Blakely

"When I was a child, my father used to encourage my brother and me to fail. At the dinner table, instead of asking about the best part of our day, he would ask us what we failed at that week. If we didn't have anything to tell him, he would be disappointed. When we shared whatever failure we'd endured, he'd high-five us and say, 'Way to go!' The gift my father gave us by doing this was redefining what failure truly meant." – Sara Blakely

"Don't be intimidated by what you don't know. That can be your greatest strength and ensure that you do things differently from everyone else." – Sara Blakely

"Instead of failure being the outcome, failure became not trying. And it forced me at a young age to want to push myself so much further out of my comfort zone." – Sara Blakely

Habit #1 - Have a Clear Vision

She had a vision for her life beyond where it was in the moment. It's hard to build toward something when you don't know what it looks like. She could see her self being on TV and being a prominent time entrepreneur before it ever happened. She is a master of beginning with the end in mind. Knowing where she wants to go and then just figuring out the most efficient directions to get there.

Visualizing where you want to be daily is a great habit to build into your routine. The vision always needs work, but the vision helps to remind you why you are working so hard in the first place. The vision is how you know that you are moving in the right direction. Everyone works hard, but most do it without a clear vision.

The Sara Blakely net worth is a direct result of her persistence. She would not take no for an answer. She had practiced as she was already a salesman. She decided that same heart and poured it into the love she had for her own idea.
Once she decided she was going to start Spanx, the hard part was getting someone to manufacture her new idea. No one wanted to do it because she was a nobody that was backed by no one. She was starting the company with $5,000, and she was getting laughed out of rooms.

She stayed persistent, though, and eventually, she wore people down. One of the manufactures went home and told her daughter about the idea as if it was crazy, and she said to him that she would love to have the product. That made them change their minds, and Spanx was born.

Habit #3 - Focus On The Important Stuff

The hardest thing about being an entrepreneur today is that there are so many things that you can do. Sara Blakely focused on what mattered the most, and that was doing what was most important without being distracted. She did not get a website until she needed one. She was not wasting time on social media all day. Her main concern was getting the product to be as excellent as possible and sales

Everyone can learn from this because it is easy to get distracted with busy work that does not matter today but may matter in a year. Don't let this be you. Focus on doing the work that is going to move the needle. The Sara Blakely net worth just kept growing because she never lost sight of what has mattered the most. 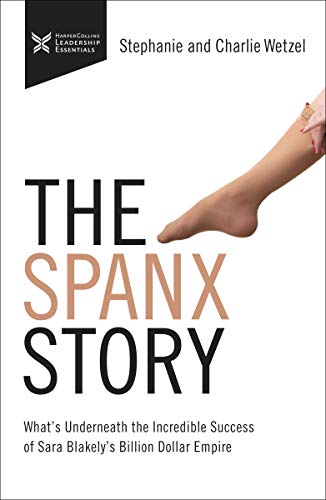 The Spanx Story: What's Underneath the Incredible Success of Sara Blakely's Billion Dollar Empire (The Business Storybook Series) Learn More Learn More
We earn a commission if you click this link and make a purchase at no additional cost to you.

Have a Clear Vision

Focus On The Important Stuff