The Millionaire Fastlane is one of the books that is embarrassing to be seen reading because the title is so cheesy. Here is the thing, though. The content inside of the book is incredible, and it's one of those books you can't read unless you're ready for your entire world to be turned upside down.

MJ Demarco is an American entrepreneur that teaches people that they don't have to wait until they are 65 to enjoy life and make a lot of money. He sold a business when he was relatively young and bought a Lamborguiinin and use that to brand himself as a new financial expert.

"Somebody should tell us, right at the start of our lives, that we are dying. Then we might live life to the limit, every minute of every day. Do it! I say. Whatever you want to do, do it now. There are only so many tomorrows. ~ Michael Landon."

"Time isn't a commodity, something you pass around like a cake. Time is the substance of life. When anyone asks you to give your time, they're asking for a chunk of your life. ~ Antoinette Bosco."

"Stop thinking about business in terms of your selfish desires, whether it's money, dreams, or "do what you love." Instead, chase needs, problems, pain points, service deficiencies, and emotions."

Habit #1 - Think Outside the Box

MJ DeMarco has created an excellent living for himself by deciding to live different from the normal. What most people call normal, he calls the slow lane. The slow lane is going to school to get into debt so that you can get a job you don't want and drive average cars and live in ordinary houses.

If you play your cards right, you may be able to build your 401K over 65 years and have something to retire on. Anything that demands you trade your entire life for it is probably not worth it unless it has a greater reward.

You only get to be young once. You only get to watch your kids grow once, so how can you make the most of life? These are the questions that MJ Demarco gets people to think about.

It's looking at everything that society calls normal and deciding what the truth is and what is a lie that you have been sold. When you develop the habit of thinking this way, you get closer to carving out the life that you want instead of just accepting the leftovers given to you.

He points out clearly that the problem is not getting rich quick. It's trying to get rich quickly. There is no way to get rich without an immense amount of effort.

Why build wealth over 60 years if you can do the same thing in 5 years and invest that same amount and let a large amount of money begin to develop interest.

MJ Demarco focuses daily on his grind to build assets that can keep generating wealth forever. Internet businesses and books can make money without having to put in a tonne of effort after the work has been put in. Once you can do this, you can have freedom from the 9 – 5 and live life the way you want to do.

When he initially put out the Millionaire Fast Lane, the cover of the book was so cheesy it was hard to believe it sold as well as it did. Understood something that a lot of people forget, and it's the fact that you have to get started and learn as you go.

He had the best selling book without even having a good cover. Then, later on, he went back and improved the protection of the book. He has done the same with his website, just making slow and steady improvements over time.

Everyone can learn from this because there is no such thing as perfect. You have just to put yourself out there and get some feedback from the real world and then make the changes needed as you go. All the time you spend waiting is the time that you could have been starting. 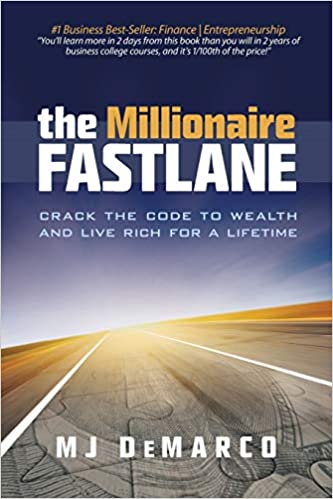 Think Outside the Box