“Don’t let the fear of losing be greater than the excitement of winning.” – Robert Kiyosaki. Here are 43 Inspirational Quotes About Survival.

1. “The important thing is not being afraid to take a chance. Remember, the greatest failure is to not try. Once you find something you love to do, be the best at doing it.” – Debbi Fields

2. “Success is no accident. It is hard work, perseverance, learning, studying, sacrifice and most of all, love of what you are doing or learning to do.” – Pele

4. “Surviving a failure gives you more self-confidence. Failures are great learning tools.. but they must be kept to a minimum.” – Jeffrey Immelt

5. ”You know you are on the road to success if you would do your job, and not be paid for it.” – Oprah Winfrey

6. “Humor is one of the best ingredients of survival.” – Aung San Suu Kyi

7. “Survival can be summed up in three words, never give up. That’s the heart of it really. Just keep trying.” – Bear Grylls

8. “We don’t even know how strong we are until we are forced to bring that hidden strength forward. In times of tragedy, of war, of necessity, people do amazing things. The human capacity for survival and renewal is awesome.” – Isabel Allende

9. “Victory at all costs, victory in spite of all terror, victory however long and hard the road may be; for without victory, there is no survival.” – Winston Churchill

10. “It angers me when sustainability gets used as a buzzword. For 90 percent of the world, sustainability is a matter of survival.” – Cameron Sinclair

11. “Extinction is the rule. Survival is the exception.” – Carl Sagan

12. “Nobody talks of entrepreneurship as survival, but that’s exactly what it is and what nurtures creative thinking.” – Anita Roddick

13. “And while the law of competition may be sometimes hard for the individual, it is best for the race, because it ensures the survival of the fittest in every department.” – Andrew Carnegie

14. “It takes more than capital to swing business. You’ve got to have the A. I. D. degree to get by — Advertising, Initiative, and Dynamics.” – Ren Mulford Jr.

15. “Adaptability and constant innovation is key to the survival of any company operating in a competitive market.” – Shiv Nadar

16. “In the real world, all rests on perseverance.” – Johann Wolfgang von Goethe

17. “Success seems to be connected with action. Successful people keep moving. They make mistakes, but they don’t quit.” – Conrad Hilton

19. “The winners in life think constantly in terms of I can, I will, and I am. Losers, on the other hand, concentrate their waking thoughts on what they should have or would have done, or what they can’t do.” – Dennis Waitley

20. “To cherish what remains of the Earth and to foster its renewal is our only legitimate hope of survival.” – Wendell Berry

21. “People are definitely a company’s greatest asset. It doesn’t make any difference whether the product is cars or cosmetics. A company is only as good as the people it keeps.” – Mary Kay Ash

22. “The more we exploit nature, The more our options are reduced until we have only one: to fight for survival.” – Mo Udall

23. “In the animal kingdom, one of the keys to survival is to outwit your enemies. And when you’re surrounded by carnivores, one of the best strategies is to fade into the background and disappear.” – Neil deGrasse Tyson 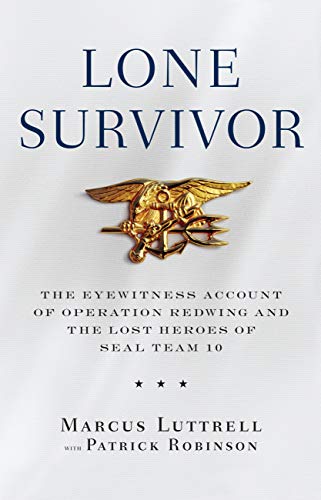 Lone Survivor: The Eyewitness Account of Operation Redwing and the Lost Heroes of SEAL Team 10
$11.99
Learn More Learn More
We earn a commission if you click this link and make a purchase at no additional cost to you.

24. “Every creature is better alive than dead, men and moose and pine trees, and he who understands it aright will rather preserve its life than destroy it.” – Henry David Thoreau

25. “I am someone who always gets up again, even if there are setbacks. I have a survivor instinct. I’m not sure where it comes from, but probably from all the little things that make you into who you are.” – Heidi Klum

26. “When you’re placed in a world where survival is the main focus, a lot of that other stuff, like wrongdoings in the past, become obsolete. You have to focus on the here and now.” – Alycia Debnam-Carey

27. “Survival is not about being fearless. It’s about making a decision, getting on and doing it, because I want to see my kids again, or whatever the reason might be.” – Bear Grylls

28. “The rules of survival never change, whether you’re in a desert or in an arena.” – Bear Grylls

29. “Perseverance is failing 19 times and succeeding the 20th.” – Julie Andrews

30. “The human being is very resourceful. When you fight for survival, you don’t think much; you just do. If you think too much, you sink.” – Frank Lowy

31. “They claim this mother of ours, the Earth, for their own use, and fence their neighbors away from her, and deface her with their buildings and their refuse.” – Sitting Bull

32. “Self-interest is but the survival of the animal in us. Humanity only begins for man with self-surrender.” – Henri Frederic Amiel

34. “Great works are performed not by strength but by perseverance.” – Samuel Johnson

35. “Living in a small town, one of the keys to survival was your imagination.” – Nick Nolte

36. “By perseverance, the snail reached the ark.” – Charles Spurgeon

39. “Sustainability is the key to our survival on this planet and will also determine success on all levels.” – Shari Arison

40. “Keeping an active mind has been vital to my survival, as has been maintaining a sense of humor.” – Stephen Hawking

41. “Earth is abundant with plentiful resources. Our practice of rationing resources through monetary control is no longer relevant and is counterproductive to our survival.” – Jacque Fresco

43. “Raising awareness on the most pressing environmental issues of our time is more important than ever.” – Leonardo DiCaprio

- Victory Road – How to Make Sure You Walk The Right Path

- Never Lose Hope – 9 Quotes to Make Sure You Don’t

Best of Quotes About Survival

“In a world where change is inevitable and continuous, the need to achieve that change without violence is essential for survival.” – Andrew Young

“Survival is a privilege which entails obligations. I am forever asking myself what I can do for those who have not survived.” – Simon Wiesenthal

“It is not the strongest of the species that survive, nor the most intelligent, but the one most responsive to change.” – Charles Darwin