Steve Harvey made his break with comedy. People today know him for being the host of Family Feud and for a lot of his books. But his base comes from comedy. He used comedy to open many other doors for himself. He was sleeping in his car and using all of his money to eat and help his family survive back home. As he continued getting more gigs, the pinnacle of his comedy career was the Original Kings of Comedy.

His first big project outside of just doing comedy was "The Steve Harvey show" had him playing as a Music Teacher to some knuckle head boys that he constantly helped to whip into shape. Once Steve proved he could act the door exploded open with opportunities like Think Like a Man, The Fighting Temptations and You Got Served. 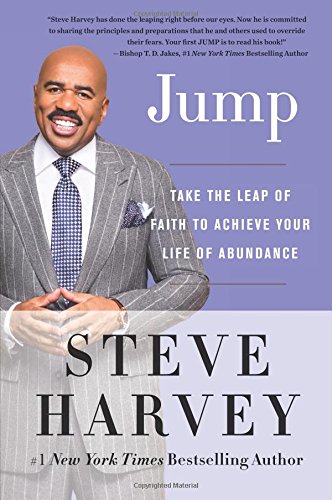 Jump: Take the Leap of Faith to Achieve Your Life of Abundance Learn More Learn More
We earn a commission if you click this link and make a purchase at no additional cost to you.

1. Failure is a great teacher, and I think when you make mistakes and you recover from them and you treat them as valuable learning experiences, then you’ve got something to share. – Steve Harvey

2. Women are the real reason we get up every day. I’m talking about real men. If there were no women, I would not even have to bathe, because why would I care? These are guys I’m hanging with. I wake up for a woman every day of my life to make it happen for her. – Steve Harvey

3. I’m just a living witness that you can be an imperfect soldier and still be in the army fighting for God Almighty. Don’t you think you got to be perfect ’cause I ain’t. – Steve Harvey

Harvey Net Worth and Key Habits

Habit #1 - Do Whatever It Takes

The Steve Harvey Net Worth has grown because he is willing to do whatever it takes in order to be successful. Any man who sleeps in his car away from his family is on anther level. If someone had a show for him it did not matter how far it was, Steve would make the drive to that show because he wanted it that bad. He was not picky, he would take any money he could get. He had no ego and was not to proud to bed.

You have to be willing to do anything that is needed. Most people say they want to be successful but they rarely will take any risks or put in the work when the opportunity is right in front of them. If Steve would have sat at home waiting for a call it would have never come.

Habit #2 - Be Great Then Expand

A lot of people see that Steve does so much and they mistakenly try and do the same thing as him and fail. They want to make movies, do comedy, write books and be hosts but it never works. The reason why is that you have to be known for being really good at one thing. For Steve Harvey that one thing is comedy. He can make jokes with the best of them and is considered to be one of the best black comedians ever.

Once he got good at Comedy he used that to get other opportunities. He is great on Family Feud because he is funny as hell! His books rock because he has a great story and he is funny. He can act great because he is funny and you can see that on the big screen. The point is that you need to get really good at one thing and then expand from there.

Habit #3 - Find Your Gift and Jump

The number one thing that Steve Harvey preaches more than anything else is that you have to find your gift. That is how you get good at one thing. You find out why the Good Lord put you hear and you do that thing until you are amazing at it. When you are amazing then you start to find the way to apply that gift to some broader opportunities so you can reach more people.

The gift is everything to Steve Harvey. Its the thing that you can do naturally and you just love it. You can do it so well it just seems effortless. The Jumping is when you use that gift. You depend on your parachute opening so you can do things the way you want to do them. The problem with most people is that they know that the parachute does not open right away and that is scary at first. 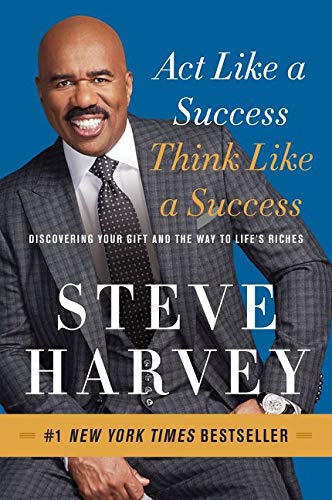 Act Like a Success, Think Like a Success: Discovering Your Gift and the Way to Life's Riches Learn More Learn More
We earn a commission if you click this link and make a purchase at no additional cost to you.

Summary of The Steve Harvey Net Worth and Key Habits

Fight Until The Very End